Tuskawilla came to be when a New York merchant made a fortune in lumbering and trade with the Spanish. The holdings from Spanish land grants included the land, later named Winter Springs. Henry Gee, a wealthy landowner and slave driver, and his son, John Henry Gee, persuaded the territorial governor to give them part of the old land grant along Lake Jesup.

The lake’s wharves went as far down as they could so that steamboats could land freight for wagons to haul goods to Maitland and Orlando. Many farmers brought their crops to the lake’s wharves. W.W. White, whose wharf near Clinton Springs had everything the settlers needed, was one of the most successful merchants at Lake Jesup.

Soon, Lumbering crews, sawmills, and turpentine stills were being built in the south, as well as the movement of cattle along the spring-fed lakes. Fewer than 600 people were residents of the area when it was incorporated as North Orlando in 1959.

Today, Winter Springs is home to over 36,635 people, and has the largest area of the county’s seven cities. Winter Springs was also recognized by Money Magazine in 2007 and 2011 as one of our country’s “Best Places to Live.”

For more information about the City of Winter Springs, visit: http://www.winterspringsfl.org/ 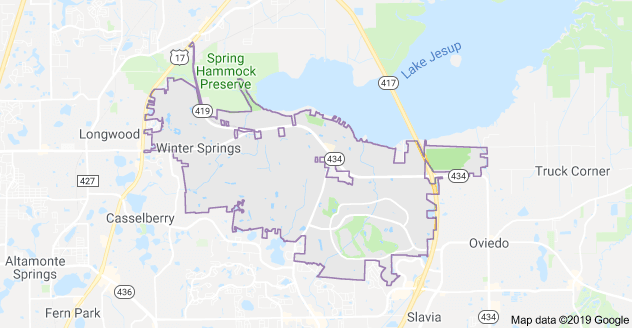